Your Breathing Problems May Qualify You For Monthly VA Disability Benefits

How Military Service Can Cause Breathing Problems

Airborne toxins that cause long-term physical damage are not uncommon for service members to encounter while on active duty, including:

Establishing A Direct Service Connection for Your Breathing Problems

When you apply for veterans disability benefits, you must prove that your active military service directly caused your respiratory illness. Since respiratory illness can also occur after you’re discharged from duty, that link is absolutely essential to your claim’s eligibility. Here’s what you’ll need:

Most often, the VA will require your doctor’s opinion about whether or not a service-related event caused your respiratory illness. Your doctor must submit documentation that explains why your breathing problems should make you eligible for service-related disability compensation.

The Department of Veterans Affairs then rates your respiratory illness according to the VA Schedule of Ratings Disabilities. (Respiratory illnesses are rated under Section 4.97, with diagnostic codes 6502 through 6847.)

Which Respiratory Illnesses Can Receive A VA Disability Rating?

Below are some common respiratory illnesses and other breathing problems listed in the VA disability rating schedule’s guidelines:

Depending on what’s causing your breathing problems, the VA will rate your respiratory illness according to:

Getting a Presumptive Service Connection for Disability Benefits

You’ll also get a presumptive service connection if excessive radiation exposure caused your cancer of the pharynx or bronchiolo-alveolar carcinoma. Veterans face higher radiation exposure risks than civilians do for several reasons, including:

Vietnam veterans who develop respiratory cancers after exposure to either Agent Orange or other herbicides don’t need proof. Instead, they should qualify for full VA health care and disability benefits automatically.

If you have a respiratory illness you believe is service-connected, then you may qualify for VA disability benefits. You can also consult a VA-accredited attorney who’ll answer your claim questions for free. 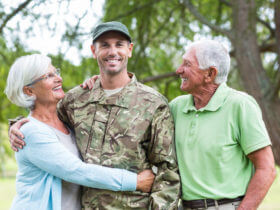 Why Was My Veterans Benefits Claim Denied?